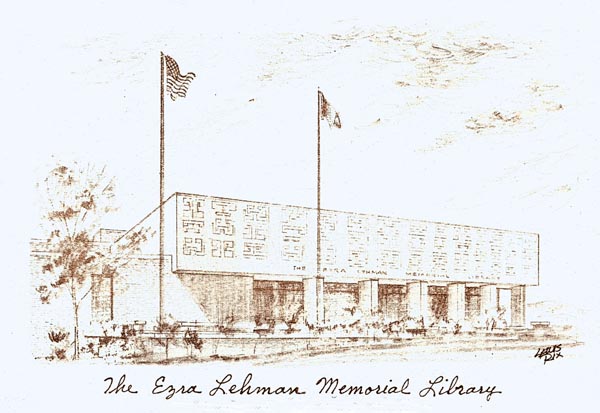 In the beginning—1873—the library and reading room of the Cumberland Valley State Normal School (CVSNS) was located in Old Main: “An elegant and commodious room, opening out of the Chapel…” Even though the school was less than three months old, the library contained over two hundred volumes. While publishers and government agencies donated books and periodicals, the collection was largely the result of donations from Shippensburg residents with an interest in the school, such as E.J. McCune, George Dykeman, Alexander Stewart, and other friends of the library. Contributions allowed the library to more than double in size in the first year.  Donors were listed in the Catalogue.

In 1890 the reading room was upgraded with new paint and furnishings. The library in the reading room was augmented by the libraries of the Philomathean and Normal Literary Societies, and in 1902 the societies donated their collections to the main library so that the materials would be more accessible to everyone. When the chapel was remodeled in 1902-03, a new library room was built in the back of the chapel. It had stained glass windows and oak tables and chairs.  In 1920 the library was still in the same place, with “a librarian always in charge… in order that perfect quiet may reign…” By 1930 the collection had increased to 10,000 volumes, and there were two trained librarians to help students with research. In addition, a course in Library Methods was taught.

The first library building, which is now Huber Art Center, was opened during the summer of 1932. It was named in memory of Ezra Lehman, President of the College from 1913 to 1931, when he died unexpectedly. Our institution flourished under his leadership, and he was greatly loved. The library was dedicated on Homecoming Day, November 12, 1932.  The speakers, Dr. Omwake, President of Ursinus College and alumnus of CVSNS, and Jesse S. Heiges, acting President, stressed the important role Dr. Lehman had in planning the new library. The collection had grown to 16,000 volumes, with six newspapers and over 150 periodicals. The building could seat 200 students, with the lower level being used for reading and study. The balcony floors were reserved for upperclassmen, and they could pay a $.50 deposit for a key to reserve a table for a week or two. There was a large room in the basement that was to become a museum. The books were on open stacks, arranged according to the Dewey Decimal system, and found with a card catalog. Books could be borrowed for two weeks, and the overdue fine was one cent a day. There were higher fines for reserve books, just as there are today. The library was open from 8am-5:30pm Monday through Saturday, and during the week it reopened in the evening from 7pm-9pm. The students were quite pleased with the new building—no more scrambling for seats in an overcrowded room or enduring cooking smells coming from the kitchen.

Thirty years later, planning for the present Ezra Lehman Memorial Library began in February 1961. Alma Winton, who had been a librarian with Clara Bragg in the previous library building, was instrumental in the planning. The new building would be in the center of the planned campus, symbolic of its function as a focal point of academic activity. It would have four times the capacity of the old one.  Features included air conditioning and modular design to allow flexibility. The periodicals room consolidated all formats—current issues, bound volumes, and microfilm—in one location, a convenient change from the past. Miss Winton had the foresight to include electrical conduits for future computers. She also provided facilities for the fast-growing Pennsylvania Collection and Archives, as well as a Rare Books Room. The Library Science Department and Curriculum Laboratory occupied the lower level. The official groundbreaking was August 4, 1966. It was attended by Judge Paul Lehman, Ezra Lehman’s son, and Dr. Ralph Heiges, Jesse S. Heiges’ son.