Skip to main content
It looks like you're using Internet Explorer 11 or older. This website works best with modern browsers such as the latest versions of Chrome, Firefox, Safari, and Edge. If you continue with this browser, you may see unexpected results.

Is it right to target kids in advertising?

Is it fair to target kids with advertising?  Do you feel that kids are as good as adults are at understanding how advertising can be confusing?  Are there any specific items that advertisers should not be allowed to advertise to children?

1.   At your table, take 5 minutes to make a list of all the food advertisements of which you can think.

2.   Pick a speaker to share your answers.  Your teacher will make a list on the board.  After this, we will put this list into a pie chart based on types of food.

How do you know an advertisement is targeting kids?

Here are a couple things that might give the hint that advertisers are targeting YOU:

1.  Kids are the center of the ad or have the main voice of the ad.

Share any other "hints" you can think of that might be a clue that an advertisement is targeting kids.  Your teacher will make a list on the board.

Food in Kids' Commercials: What Is Really Happening?

How does this list compare to the pie chart shared in the box below? 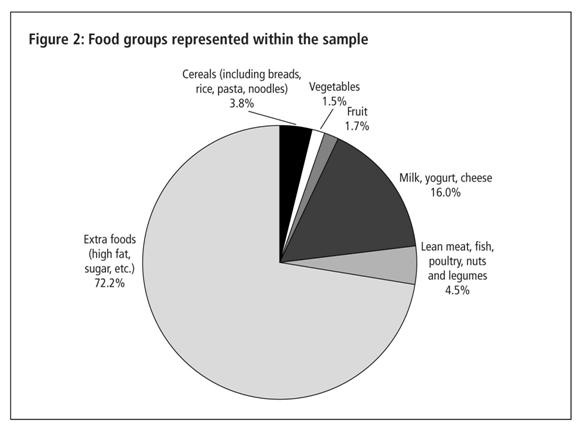 It's Not Only Food Ads that Target Kids Unfairly!

Did you know that tobacco manufacturers once used cartoon characters as mascots for their products?  The tobacco industry claimed that the ads were not aimed at making kids want to buy cigarettes.  However, they eventually stopped the advertisements due to public outcry.

One cigarette company used Kool the Penguin, another used Joe the Camel.  Another used "the Marlboro Man," which wasn't a cartoon character but was criticized for appealing to children's love of cowboys.

Directions:  View the following two cartoons that poke fun at the tobacco industry and its mascots.  Take a few minutes to think about what these cartoons are trying to say.  Next, spend a couple minutes with your partner sharing your thoughts.  Finally, be ready to share your thoughts with the class.  Listen to your teacher for instruction on when to start and stop each step.

Cartoon #1:  The tobacco industry and kids.

Cartoon #2:  Out of work tobacco mascots.

Independent Work: View the two images below.  Fold a piece of paper lengthwise (hot dog fold).  On one side, list the things you see in each image.  On the other side, list who you think the audience(s) would be if this image were part of an ad.  Also list which advertising techniques would be used if this image were the center of an ad.

Whole Class Work:  We will create a Venn diagram that compares and contrasts these two images on the white board.  Finally, we will discuss whether or not you think these images stereotype boys/men and girls/women.  What if these were used in ads?  Is stereotyping in advertising "ethical"?