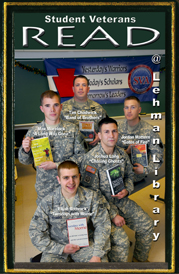 Jordan Mattern
Psychology Major with a Philosophy Minor
Class of 2011

Pressfield, Steven. Gates of Fire: An Epic Novel of the Battle of Thermopylae. New York: Doubleday, 1998.

I enjoyed Gates of Fire because it reminded me of the movie, The 300.  The story a recounting of four thousand Greek heavy infantry defending their nation against two million Persian invaders.  The book really captures the relationship between brothers-in-arms, and the desire to protect one's nation despite overwhelming odds.

I also gained strength from the description of fellow military officers by their soldiers.  My favorite quote from the book was extremely powerful:  "War and preparation for war call forth all that is noble and honorable in a man.  It unites him with his brothers and binds them in selfless love..."

This book taught me that military service is the greatest sacrifice one can make for his country.  Also that virtue can shine even during the darkest days of war.

Chasing Ghosts is the first book that I remember that gives the reader the Rated R version about the War on Terror.  I would not only recommend this book to all Americans, but I challenge them to read to this book in order to better understand what War is truly like.  It seems that over the past 10 years that the War on Terror has been associated with the typical "Call of Duty" games and what is displayed on television.  This book will change the way a person acts and feels about our great nation.  Chasing Ghosts is absolutely a must read for any people who pride themselves as true patriots!

Tuesdays with Morrie is a short book that portrays a wise man's perspective on life. It really shows the reader that all the things we do in life boil down to two things: Don't sweat the small stuff and enjoy life because it really is too short. The two main characters are a [former] student and  his professor who have an uncanny relationship.  The professor gives the student insights into life as the professor approaches the end of his due to failing health. They do this by meeting for fourteen Tuesdays until the professor is laid to rest.

I chose the book Band of Brothers by Stephen E. Ambrose because it chronicles the exploits of Easy Company 506th Parachute Infantry Regiment.  The book gives a depth of insight into a group of our “Greatest Generation” who endured almost five years of difficult conflict to ensure global freedom from tyranny. The book does an excellent job of portraying the sacrifice, professionalism, and leadership that the United States Military is built upon.  Richard Winters, the Commanding Officer of Easy Company and a key figure in this book is a role model for any military leader.  His courage, intelligence, tenacity, and calm under fire makes him a role model for any military leader.

A Long Way Gone by Ishmael Beah is one of the most powerful books that I have ever read. The realities of what it means to be a child soldier in an African civil war are vividly painted by the author.  Beah, along with thousands of other children, had their childhoods stolen from them. They were forced into both sides of the conflict at gunpoint and by forced drug addiction. This book opened my eyes to the complete inhumanity that these children often suffer; something that is only briefly mentioned in the news.

Beah offers graphic firsthand accounts of actions that he committed including the killing of other child soldiers. Beah was eventually able to come to the United States, but is still affected by what happened to him. While Beah was rescued by UNICEF, there are still far too many children out there that are being forced into the same situation with no hope for rescue.