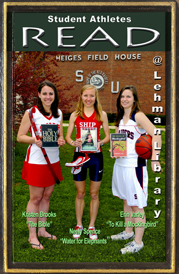 Under a striped canopy lies a world unlike any other.  Jacob Jankowski, through a series of (un) fortunate happenings during the great depression, literally leaps onto the life of the circus where sensual romance, animal stampedes, and an elephant names Rosie will keep you turning the pages as you become part of the Benzini Brother's Most Spectacular Show on Earth.  I highly recommend this book if you are looking for a compelling story with rich character development and an intriguing plot.  With the release of the movie right around the corner, there is no better time than the present to pick up a copy of Sara Gruen's Water for Elephants.

This was one of my favorite books that I was introduced to in High School and it has been one of my favorites ever since. I think it tells a compelling story about morals and the courage of the people involved and I was unable to put the book down until I was finished. I feel that it is a classic that can still be related to in many ways today.