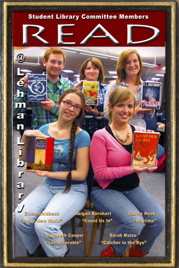 Kingsley, Jason, and Mitchell Levitz. Count Us in: Growing Up with Down Syndrome. New York: Harcourt Brace & Co, 1994.

Count Us In is a book about growing up with Down's Snydrome. My mom gave it to me when I was in 5th or 6th grade to help clear up questions I had about my cousin who has Down's.  The book is inspiring.  It talks about how the authors (who both have Down's) became what every person with disabilities wants: successful, happy, and accepted.  This book is one of the things that made me want to study psychology. It made me want to understand why people behave the way they do towards other people.

Les Misérables is a fascinating novel based in 19th century France full of excitement as well as multiple major themes. From love to revenge, obsession to acceptance, author Victor Hugo creates an intricate storyline which inspires empathy within the readers. Jean Valjean is a convict who is released into parole after 19 years in prison. A bishop takes pity on him and allows him to stay for the night, but Valjean steals the bishop's silver candlestick holders. When the bishop allows Valjean to go free regardless after he is caught, Valjean decides to dedicate his life to God. Throughout the rest of his life, he and his adopted daughter, Cosette, are pursued by the police inspector Javert. Cosette finds love in Marius, a soldier in a minor French rebellion. This novel is full of plot twists, sacrifice in the name of love, daring revolution, shocking realizations, and a view into the lives of "the downtrodden," or "les misérables." I mostly like it because it's captivating, full of twists and turns with lots of fascinating material and because it can be very poignant and touching.

Like George Orwell's 1984, Brave New World tells the story of a futuristic dystopia.  In this novel, social castes are determined at gestation and people are cloned into these positions.  Since the novel was written in 1931, there has been an increase of striking similarities to our own world like the swell of consumerism.  Since college students direct the future of the world, I chose this book because we must be cautious and pensive in our direction.

I had never had a taste for history and in high school it was always my least favorite subject. However, when I read Ragtime for the first time I saw history in a new light. The language and characterization are flawless and made history seem more real to me than ever. Doctorow combined the events surrounding turn-of-the-century America in such a great way; I felt as though I had been there. I am actually surprised that they do not assign it as required reading in high school, because I feel it would compliment an American history class very nicely. I would recommend this book to anyone who enjoys a good story, who loves history, or who even hates history, because I am certain that they would still enjoy this novel.

The Catcher in the Rye, a 1951 novel written by J.D. Salinger, is a wonderful example of a Bildungsroman. This story, which focuses on the main character's journey to maturity, is a great story for college students, especially psychology majors like myself. Salinger explores the way in which Holden Caulfield isolates himself from his family and friends and begins to discover more about the life he leads. The Catcher in the Rye is my favorite book because Salinger wrote it in such a way that the reader cannot help but laugh out loud at some of Holden's ridiculous stories, but also dig deeper inside of themselves to find their very own Holden Caulfield within. This novel is perfect for college students beginning to feel their way through new life experiences.